Behind the scenes of Iron Falcon 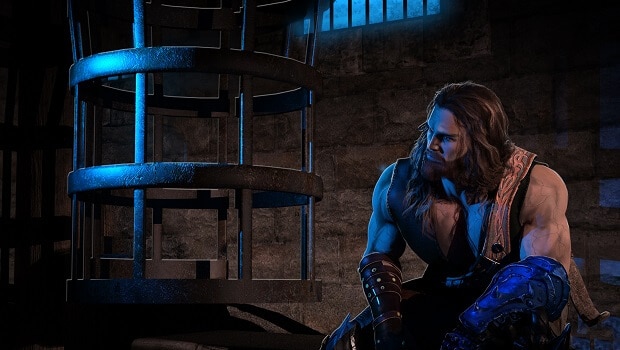 Iron Falcon – A story about war, betrayal, and intrigue

In this interactive story you play the mercenary Sardak, who suddenly gets caught up in the ancient war between the kingdoms of Rivaan and Morghul. The future of the kingdom depends on your courage, your wisdom and your decisions!

The years of peace are over. The horror reports are piling up from the borderlands of the Kingdom of Rivaan. Morghul, the old enemy, has regained strength and the old alliance with the mysterious order is shaken.

A hero is needed! A hero who gets to the bottom of what is going on in the border settlement of Stoneville and reports to the king. But who is eligible for the dangerous mission?

Your mission will first take you to the tranquil village of Stoneville, near which there is a monastery of the mysterious order and which is plagued by bandits. But it soon turns out that not everything is as simple as it seems.

Because some answers lie much deeper in the past. And so begins not only a long journey, but also an adventurous and ludicrous story for you.

You will meet friends and enemies, you will solve puzzles and fight fights, and you will discover secrets from ancient times. Quite a lot for one hero alone? It’s good that you won’t go on this adventure alone.

Because you will have a loyal companion at your side, who will strengthen you in your decisions and help you through difficult times. You will love them! Well, or not. Maybe she just drives you crazy!

The Iron Falcon is an interactive story that is suitable for beginners as well as fans of classic game books. The principle of the game is easy to learn and, in addition to many options for action, also offers entertaining features such as chance encounters, hidden options for action, puzzles and long-term decisions that affect later events.

This creates a great incentive to play the story several times and, together with an exciting story, lots of laughs and surprising elements, makes for a lively game world. This allows you to play the free interactive story multiple times to learn about other events or to experience a different ending.

The Iron Falcon has a playing time of 60 to 70 minutes and a total of over 90 audio minutes. You can play the interactive story as an Alexa Skill or as Google Action via voice control. The texts are pictorially and vividly written and audio book speaker and actor Michael Che Koch has skilfully staged the scenes and dialogues, so that you quickly get caught up in this epic fantasy world.

What are interactive stories?

Have you always wished that there were stories in which you can determine what happens for yourself? This is possible in our interactive stories for voice, because here everything depends on your decisions.

After a passage of text, you are given the choice of what will happen next, what the main character should do or say. This is done very easily using appropriate voice commands.

Join the rebel or support the regime? Climb the rock face or cross the river? Lie to the dragon or rather be honest? And where do these stairs actually lead here? Depending on how you decide, the story develops differently and you experience your very own personal adventure!

Whether child, adult, audio book lover, side listener, puzzle lover, world explorer, for alone on the couch or together with friends – our stories, stories and worlds are waiting for you!

Is the entry too slow for you?

Then you should still play to the point where you can choose your weapon. Just let yourself be surprised by the turn of the story.

The solution to the clay puzzle in the dungeon cell

Various routes lead out of the dungeon cell. One of them is the secret passage that you can discover in the wall. At the end of this you will come to a clay puzzle, for the solution of which there are three correct combinations:

The shortest way to the throne room

An abbreviation in the prehistory can be particularly interesting for replayers. Whoever wants to get to the king as quickly as possible should simply “wait” in the dungeon cell and then plead “innocent” to Erendil.

The shortest way through the labyrinth

Okay, the shortest way through the labyrinth is of course to take the “shortcut”. But if you still want to venture into the dark caves, this solution is the quickest way to get ahead.

East, south, south, west, south, east, south
West, South, South, East, South, East, South
There are also two other, slightly longer paths that lead out of the maze. Originally there was only one correct and far more complicated way. But after the first indications from players that the maze was aurally too complex, we simplified it accordingly.

The fight against Granor takes place according to the rock-paper-scissors principle. In the game you get up to three clues to defeat him:

When Granor lowers his sword, don’t attack, but dodge and quickly take a step back!
If Granor strikes from above, it’s just a feint. Then just attack right away!
If Granor backs away, aim for his right leg!

The first bump is obtained when the three bounty hunters “insulted” at the beginning. Anyone who then “waits” in the dungeon cell and then “fights his way free” with “violence” will get another bump. The number of bumps leads to different reactions of the king in the throne room to the sight of the hero.

If you pay close attention when you wake up in the dungeon cell, you will receive a hidden hint that there is a rat hole in the dungeon cell. This option is not offered to you in the next scene, in which you can choose whether to examine the wall, the door or the window, but you can still choose it by typing “corner”, “rat” or “rat hole ” says. For your effort you will then be rewarded with some background knowledge about the legendary sword Angarosch.

The stone on the window

If you examine the window in the dungeon cell, a stone breaks out of the wall and falls down. This stone kills the captain of the guard who is passing in front of the walls, which later leads the king to suspect in the throne room that the kingdom of Morghul carried out an attack on him.

The sword in the stone

Anyone who tries – against all advice – to pull the sword out of the stone not only embarrasses himself in front of the king and his court, but also triggers a small special event at the port. Yes, so much ignorance has to be rewarded accordingly.

The man in the river

Anyone who tries to toss the branch to the man in the river must find that a throw can be a matter of luck. Whether and how successful the litter is is decided by chance.

How it all begann

The Iron Falcon was written for participation in the Amazon Alexa Games Skill Challenge 2018. And with considerable success, after all, the interactive story convinced the Amazon Alexa jury and achieved first place!

Of panic and night shifts

What we did not mention in the interview about our interactive story as Alexa Skill, however, was the night and fog actions that lasted several weeks, which were necessary to complete the decision story on time. The escapades with the technology and the recording studio alone were an experience in themselves. When using audio files, Amazon only allowed 90 seconds of text between a user’s decisions.

The fact that in our story tool there are sometimes several text fields hanging one behind the other, which are then output as an audio file, meant that the total length of the files produced by the recording studio was 90.1 to 93.4 seconds in many places. We also only noticed this the night before the submission deadline.

Nothing helped, with dozens of energy drinks and a panic night shift, almost all files had to be shortened by hand or the speed increased. And testing the story, which consists of over 150 text fields, was an experience in itself. Well, in the end it was worth it! Of course, the first place reconciled us and made up for all our efforts, and we like to remember the turbulent phase!

A tribute to the game books and games of our youth

Anyone who knows Joe Denver’s Lonely Wolf playbooks will immediately notice that The Iron Falcon is a tongue-in-cheek homage to these playbooks that we had so much fun in our youth. There is, for example, the attack on the caravanserai at the beginning, which the hero is the only one to survive, the mysterious order of warrior monks and the two warring kingdoms.

We borrowed the humor and breaking through the fourth wall from great text adventures like Monkey Island and Kings Quest, both of which are just wonderfully stupid. You should definitely have played it!

Of sarcasm and irony (spoilers!)

The laurel-wreathed generals of Rome were supported by a slave during the triumphal procession, who was supposed to whisper in their ears to remind them that they were mortal. Well, on your journey to heroism and immortal fame, Alexa is at your side in the Iron Falcon, who sarcastically comments on every decision you make, constantly tries to throw you into disaster with useless and confusing tips and likes to remind you that you only have one You are a fool.

How do you come up with such an idea? Not at all, you have to experience it yourself. We would like to take this opportunity to thank the “Embarrassing. Awkward. Embarrassing! ”- Girls for the inspiration for the Iron Falcon!

How to Write Interactive Fiction and Interactive Audio Stories – 046 – Coaching for Writers
April 25, 2022